The Cat In The Hat

Slash is one of the most commercially successful rock n’ roll musicians of the 21st century. Best known as the lead guitarist for Guns n’ Roses and Velvet Revolver, Slash is one of those musicians who just plays—and plays aggressively and emotionally. If there’s anything guitarists can learn from him it’s that we should never take for granted the work that goes into simplicity—not playing simplistically, but rather building technical skill without the aid of pedals that mask sloppiness and thoughtless crafting. For Slash, intonation is just as important as being in tune. A guitarist can tap and shred all they want and have wild vibrato and crazy effects hooked up, but if the listener or fellow musicians cannot understand what is being played, what good does all of that complication do?

Born in 1962 in London, England as Saul Hudson, the conditions for Slash to become the kind of guitarist he is today were perfect from the start. Growing up, Slash was directly exposed to rock n’ roll through his very well-known parents: Ola Hudson, who designed costumes to stars, and Anthony Hudson, who designed album covers. His influences include bluesmen B.B. King and Albert King, but also the rockers who make up the “classic rock” genre: Jimmy Page, Joe Perry, and Eric Clapton—all great melodic blues-rock guitarists.

Considering his influences, Slash worked to become a great melodic guitarist himself. Listen closely and one can hear an incredible amount of Perry sensibility in Slash’s playing. His mastery over pentatonic scales, using passing tones and blues notes to transform them into melody, allows him to create not just catchy solos and riffs, but ones that recognize harmony between chords as well—which is why that introduction to “Sweet Child O’ Mine” is so pleasing to listen to. He plays using a traditional three-finger lead, as opposed to a four-finger style which utilizes the pinky finger, and loves to play what he can hear a melody in.

To put it simply, Slash is a great guitarist who knows what he likes and doesn’t like. He’s a minimalist and doesn’t need pedals to make him sound professional. However, there are a few things that he likes to use and for the most part he remains loyal to that core equipment, from his guitar to his pedals.

Probably the most iconic piece of gear that Slash uses is his Gibson Les Paul. Let’s talk about Gibson LPs for a moment. Slash is not the only guitarist to claim that this guitar is the best one for their sound. It is a timeless guitar, USA-made, but incredibly expensive. Is it worth the price? Ultimately, yes. Like all guitar makes, you’ll find that some LPs play better than others—it’s a matter of the craftsmanship. For Gibson LPs, the 1980s saw a drop in quality. However, Slash uses a Gibson LP made in the 80s on the Guns n’ Roses album Appetite for Destruction. From a listener’s standpoint, the quality is fine. If you purchase a Gibson LP Standard, you are purchasing something that has—no matter what the era—higher-quality and rarer hardware installed, with more thought going into the design. It is not necessarily a guitar that is ideal for heavy metal shredding, but it gives melodic rock a complementary, gutsy warmth. If on a budget, an Epiphone Les Paul will suffice.

According to one of Slash’s guitar techs Adam Day, Slash always breaks his strings. Even his sweat hurts the strings! Yes, sweat can eat away at strings, which is more reason to wipe down strings regularly. Because of this, Ernie Ball worked with Slash on a prototype for durable, longer-lasting strings that have superior break resistance: Ernie Ball Paradigm. They are made for both electric and acoustic guitars and are about $15.00 a pack. Reviews are positive. It can be hard to trust something that has a metaphorical “new and improved” label associated with it, but pros—along with Slash and Day—are mostly on board with the new design.

On his 2012 solo tour, Slash’s technician Ace breaks down the pedals he uses. Of the seven pedals, there are about three that may be a smart investment to make if looking to adopt a Slash sound rig: Dunlop Cry Baby Wah; Boss DD3 Delay; MXR Analogue Chorus. 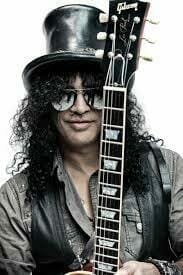 Dunlop Cry Baby Wah is about as well-known as the Gibson LP. It is a reliable, sturdy pedal. Dunlop makes a Slash model with a cherry red metallic finish. It is not only a gorgeous pedal, but offers some gain distortion as well. It is on the pricier side at $169.99, but, taken care of properly, will last.

Slash has been using the same Boss DD3 Delay—not the same box, but the same effect—since the beginning. A delay pedal is not always used to create repetitions. It can add another atmospheric level to the sound of the guitar. Premier Guitar has some great advice on how to make the most of the delay pedal, including settings for Doubling and Faux Reverb. These pedals run for about $139.99.

The MXR Analogue Chorus is the shimmery effect heard in the intro to “Paradise City.” This pedal is made to take the hardship of touring and runs for about $100. Use a chorus pedal wisely. Slash makes smart choices with the effects he applies to his sound and by adding that light shimmer in the beginning of the song he sets up the slide into the heavy, driving riff of the verse. It’s all about adding dynamic and not overdoing it with effects.

Another lesson we, as musicians, can learn from Slash is that the relationship between techs and an artist is indispensable when it’s a good one. Techs develop an intimate knowledge of an artist’s sound and when it strays from what it should be. For busy musicians like Slash who are hard on their gear, techs are the immune system of the music. We can learn an incredible amount about developing our own sound from instrument technicians, so it’s important to pay attention to what they do backstage to make others sound good.