How Hendrix Got His Sound

It is 1967. Al Hendrix sits in his living room as the hippies next door put a record on the player. He hears the music and there is something familiar in the voice. Al has never heard him sing, hasn’t heard a lick of his new music, but he knows that the man singing over the speaker is his son, Jimi Hendrix.

Born on November 27, 1942 in Seattle, WA., Johnny Allen “Jimi” Hendrix is one of the most iconic rock figures of our time, fronting The Jimi Hendrix Experience, and leading a movement of sound and philosophy that transformed the way guitarists play rock n’ roll and how aspiring musicians study music. The Hendrix sound is one that is immediately identifiable, possessing a particular grit and complexity that stands out from other rock and blues artists of any time.

Hendrix was given his first guitar at the age of 13. Self-taught, he took every opportunity that presented itself to play backup or record with other musicians. Hendrix toured the Chitlin circuit; Billy Davis, Jr. of The Isley Brothers was his tutor and mentor; he played in Little Richard’s band and with a number of soul artists. Before he was lighting his guitar on fire and wearing scarves like a headband, he was wearing suits and slicking back his hair, playing rock n’ roll in its first iteration, as Hendrix called it: “good time music.”

Then, as the story goes, one lucky night in 1966 at Café Wha? in Greenwich Village, NYC, Chas Chandler—newly departed bassist of The Animals—discovered Hendrix. Chandler flew him out to England, enticing him with the promise of meeting icons such as Eric Clapton, and assembled The Jimi Hendrix Experience with drummer Mitch Mitchell and bassist Noel Redding.

When Eric Clapton first met Hendrix, Hendrix played a Fender Stratocaster built for a right-handed player. But Hendrix was a lefty. He played that guitar mirrored. On that ‘upside-down‘ guitar, he played Howlin’ Wolf’s “Killing Floor,” proverbially turning the state of rock n’ roll and the blues upside-down, too. In a time and place where the music being churned out was, in Clapton’s words, “watered-down soul,” Hendrix’s playing was so direct. Clapton was awestruck. What many British blues musicians in the 60s considered to be their roots and main influences—the blues—Hendrix played first-hand in the States.

The Jimi Hendrix Experience quickly rose to fame, releasing three albums: “Are You Experienced,” “Axis: Bold as Love,” and “Electric Ladyland.” “Hey Joe,” “Purple Haze,” and “The Wind Cries Mary,” all hit the British Top 10 upon their release. His performance at the Monterey Pop 40 festival in 1967 and his famous rendition of “The Star Spangled Banner” at Woodstock in 1969, have become some of the most well-known performances in U.S. music history. Hendrix’s death on September 18, 1970 at the age of 27 stunned many. As Chandler said of Hendrix, “He was the best guitarist in the world because he wanted to be the best and he was prepared to work at it…his death was a tragedy, but his life was full of fun.”

Hendrix used a variety of gear, including the OCTAVIA pedal which was designed for him by his sound technician Roger Mayer. This pedal gave an octave overtone to whatever was played, best heard on the guitar solo for “Purple Haze.” A key player when it came to creating the Hendrix tone, Mayer reveals in an interview for Guitar World that it wasn’t necessary to change the pick-ups in Hendrix’s guitar, but rather pay attention to the strings’ gauges. Instead of using a traditional gauge progression like one may find in prepackaged deals (like Ernie Ball Slinky packs, for instance), Hendrix used the following: .010, .013, .015, .026, .032, and .038. This way, Mayer explains, the guitar didn’t sound so G heavy. Hendrix also used a “curvy” fretboard. Flat fretboards tend to work well for classical guitars and shredding, and higher-radius boards for rhythm. Hendrix had something in-between.

The guitars you’ll see Hendrix use include his ’68 Fender stratocaster (seen at his famous Woodstock performance), a ’65 Fender Astoria strat, a ’67 Gibson Flying-V, a ’67 Gibson SG, and a 12-string acoustic—a ’60 Zemaitis. The pedals he used were varied, but, with the exception of the OCTAVIA, were all fairly straight-foward: Marshall Supah Fuzz, Vox V846 Wah, and in his later years, a Univox Uni-vibe which provided both a speed controller and a vibra-chorus effect. At the beginning of his work with the Experience, he used a mix of Marshall, Sunn, and Fender amps, but moved on to using exclusively Marshalls.

However, the Hendrix sound comes from a place much deeper than just practice, playing an upside-down guitar, and a jazz chord the right way. 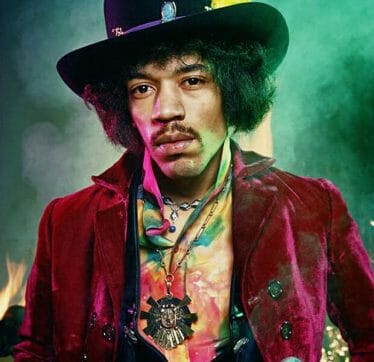 The music he played was a reflection of the atmosphere in which he lived and a philosophy he followed when he made music with The Jimi Hendrix Experience: communication and harmony between age groups. Music was his universal language, a “hazy philosophy.” His taking in of the musical zeitgeist gave him the portals he needed to travel between to blend the blues of yesterday, the Hendrix blues, and progressive thoughts, with the changing people. Unplug Hendrix to see it. Look up the acoustic “Hear My Train A’ Comin’” and watch his face. There, without the theatrics, you will see a man and his guitar: a relationship between the ages, his instrument, and the music. Now that sounds like Jimi.

2 responses to “How Hendrix Got His Sound”